The Global Fund to Fight AIDS, Tuberculosis and Malaria has announced that its Seventh Replenishment Conference, hosted in New York today by President Biden, has raised a total of US$14.25 billion, with more pledges expected over the next few weeks.

The RBM Partnership thanks President Biden and the US government for its remarkable leadership and pledge of US$6 billion to end the three diseases including malaria. It also expresses thanks to all donors and governments for recognising the gravity of the situation and substantially stepping up their pledges, including Canada, the European Commission, France, Germany and Japan, celebrates significantly increased contributions from a number of malaria endemic countries, and welcomes commitments from those pledging for the first time.

The RBM Partnership recognises these are economically challenging times and salutes all the private and public sector donors who, through their pledges, have helped demonstrate leadership and commitment to improving global health and advancing equity for all.

However, the investments announced today fall short of the Global Fund’s US$18 billion target for its next three-year funding cycle, putting at risk the aim of securing enough investment to save 20 million more lives from malaria, HIV and tuberculosis. As the Global Fund is one of the leading sources of malaria funding worldwide, the RBM Partnership and the global malaria community is concerned about the impact if today’s shortfall is not met. The RBM Partnership will continue to advocate on behalf of the communities affected by this disease.

Dr Corine Karema, Interim CEO of the RBM Partnership to End Malaria, commented: “We commend the United States government for its leadership, and all the donors who have contributed to today’s record-breaking replenishment – this money will help save thousands of lives from malaria.

“However, we are concerned that the total pledged today has not yet reached the target the Global Fund needs to contribute to get the malaria fight back on track. This funding is vital - not just to provide life-saving programmes for malaria, but to build health system resilience more generally and help protect us all from future pandemics.”

Today the malaria fight is at a precarious juncture. In 2020, 627,000 lives were lost to the disease, 69,000 more than the year before, partly attributed to the COVID-19 pandemic. The impact of stagnated funding, humanitarian emergencies, as well as the growing threats of drug and insecticide resistance, has further impacted our ability to make progress.

Dr Karema continues: “We call on those governments, philanthropists, the private sector and endemic countries who haven’t yet pledged to step up and make a commitment. Just a short window remains for governments to step up - every dollar really does count to save lives. It is not too late for governments, especially those who have previously shown such leadership and commitment to global health, to take action. Malaria endemic countries around the world will be watching and waiting.”

The Global Fund Replenishment is critical to malaria efforts as it mobilizes and invests funding for malaria programme financing across 94 countries. The Global Fund has estimated that a fully replenished Global Fund would:

For further comment or an interview please contact the RBM Partnership Press Office at Grayling on RBMPartnership@grayling.com or call +44 (0)20 3861 374.

About the RBM Partnership to End Malaria

The RBM Partnership to End Malaria is the largest global platform for co-ordinated action against malaria. Originally established as Roll Back Malaria (RBM) Partnership in 1998, it mobilizes action and resources and forges consensus among partners. The Partnership comprises more than 500 partners, including malaria endemic countries, their bilateral and multilateral development partners, the private sector, non-governmental and community-based organizations, foundations, and research and academic institutions. The United Nations Office for Project Services (UNOPS) in Geneva, Switzerland, hosts the RBM Partnership Secretariat. 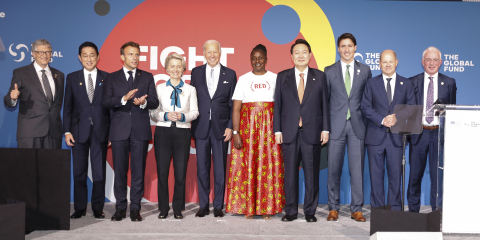